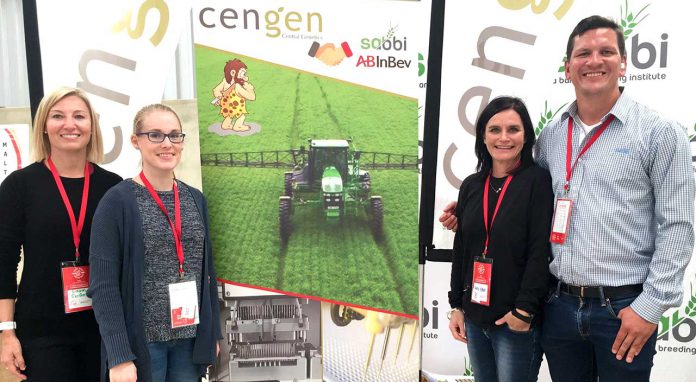 Lizaan Rademeyer and Kelly Breeds attended the AB InBev Grower’s Appreciation day at the SA Barley Breeding Institute (SABBI) at Caledon on 20 September. It is an annual event aimed at recognising the partnership between AB InBev and local barley producers, as well as at showcasing the South African barley breeding and malting processes, bearing on AB Inbev’s apt new logo We’re here for the beer.

During the course of the day the producers could visit trial sites and several information stalls of which CenGen was one.

The day’s programme included the presenting of awards to, amongst others, the best barley producer of 2017. A lifetime contribution award was awarded to Mr Francois Potgieter, former barley breeder at SABBI.

CenGen would like to congratulate Mr Potgieter on this wonderful achievement and would like to thank him for the valuable work that he has done for the barley industry in South Africa and for his participation in the barley research programme at CenGen.

Mr Potgieter has been part of the CenGen-SABBI collaboration from the start and was part of the team that visited CenGen on 17 September along with two representatives from AB InBev in the USA, Drs Gary Hanning (Director of Global Barley Research) and Josh Butler (Global Breeder and Senior Manager: Barley Research).

CenGen is looking forward to expanding their collaboration with SABBI/AB InBev to assist them in providing relevant, well-adapted barley cultivars for the South African producers.