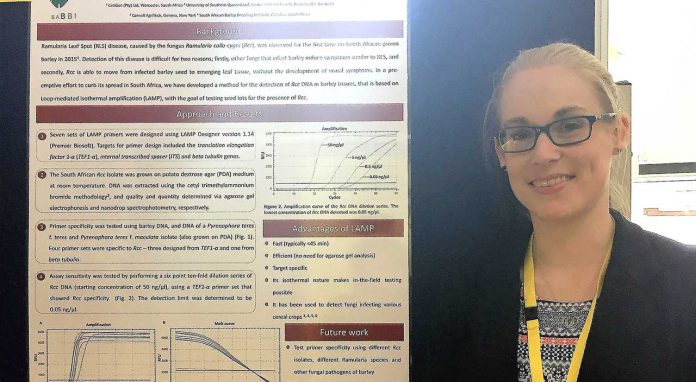 At the end of June, Kelly Breeds attended the Second International Barley Mutants Workshop (IBMW2018) at the James Hutton Institute in Dundee, Scotland. This centre of excellence for barley research was the second host for this workshop that aims to bring together scientists who use barley mutant resources to understand several fundamental aspects and processes of cereal crop genetics and biology – an approach that has proved to be highly successful in the past 10 years.

During the 2½ day workshop, many excellent presentations were delivered by renowned scientists such as Nils Stein and Martin Mascher, authors of the latest barley genome paper (published in Nature in 2017). A platform was also provided for career scientists to present their work, learn from others’ experiences and build scientific connections. In the light of this, Kelly presented a poster on one of the barley projects currently running at CenGen (in collaboration with the South African Barley Breeding Institute (SABBI) and the University of Southern Queensland, Australia), entitled Development of an improved assay for the detection of Ramularia collo-cygni DNA in barley tissues. This assay will be a useful tool that will allow the reliable detection of the much feared Ramularia fungus.

Kelly is excited to apply the experience and knowledge that she gained during this workshop back at CenGen and has already reconnected with some of the new international contacts that she made.