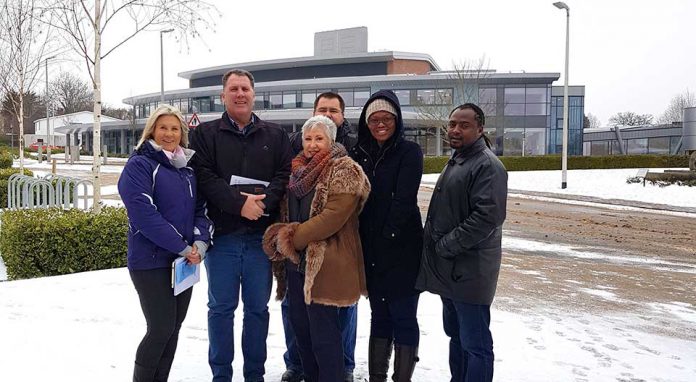 Dr Renée Prins recently had the privilege of being nominated by Agbiz Grain to join a group of South African wheat and barley researchers that visited leading research institutes and university groups in the UK.

As part of the Wheat Industry Revitalisation Programme, Ms Mariana Purnell (General Manager of Agbiz Grain), negotiated for the researchers to be invited by the British High Commission’s Science and Innovation attaché in Pretoria, Dr Xolelwa Zulu.

From 26 February to 2 March the group undertook a whirlwind trip through Britain. They had meetings with research groups at the James Hutton Institute (including the University of Dundee) in Scotland, the John Innes Centre in Norwich on the east coast, the University of Bristol (west coast), Rothamsted Research in Harpenden (central England) as well as the Department of Business, Energy and Industrial Strategy in London. They also had a Skype meeting with the Centre for Crop Health and Protection (CHAP).

Although the Beast from the East with its severe weather conditions tried its best to derail the group’s plans, it could not prevent them from liaising with most of the experts in the field of wheat and barley genomics, phenomics and bioinformatics. They gained valuable insight into the latest technologies that are available for genotyping and phenotyping and built relationships for future collaboration, technology transfer and knowledge exchange between South Africa and the UK. The development of scientific skills in South Africa and how to access international project funding were also discussed.

Dr Prins would like to express her sincere thanks to the British High Commission and Agbiz Grain for this incredible opportunity. The strengthening of ties between South African researchers and their international counterparts will undoubtedly be beneficial for the small grains industry and scientific development in our country. With these types of collaborative efforts South African scientists will have access to the latest knowledge and technology to be on par with international developments.