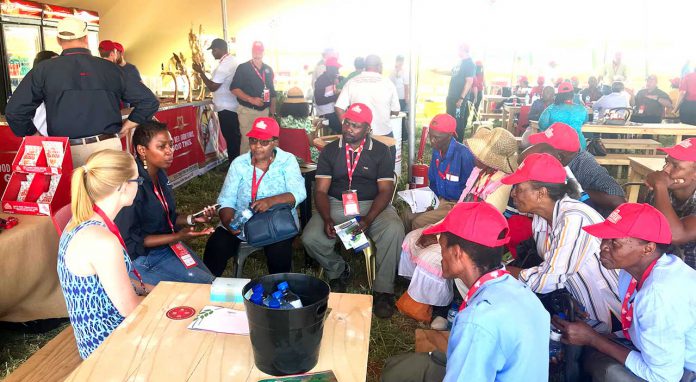 From 23 to 26 September 2018, four CenGen members (Renée Prins, Corneli de Klerk, Kelly Breeds and Lizaan Rademeyer) along with Marizanne Horn (Sensako) attended the 15th International Cereal Rusts and Powdery Mildews Conference 2018 in Skukuza. The conference focused on these two diseases in barley and wheat and was attended by leading researchers in the fields of pathogen epidemiology, pathology and genomics.

Among the keynotes were Dr Diane Saunders, a project leader within the Crop Genetics department at the John Innes Centre in Norwich, UK, Prof Beat Keller, head of Department of Plant and Microbial Biology at the University of Zürich, Switzerland, and Dr John Purchase, CEO of Agbiz, South Africa.

Two particularly interesting talks were presented by Drs Rients Niks and James Brown who gave summative lectures on the past, present and future of the rusts and powdery mildews respectively.

It was a privilege to spend four days in the company of so many great scientists and experts, and a wonderful opportunity to build international contacts for future collaborations.

The South Africa-KAUST (Saudi Arabia) cloning team also used the opportunity to visit the trial site in Greytown and to have a project meeting during the conference.

Shortly after the Skukuza conference, Kelly Breeds flew to Stansted Airport in London, UK, for a two day workshop on Ramularia collo-cygni (Rcc) in barley, hosted by Agriculture and Horticulture Development Board (AHDB) Cereals & Oilseeds (UK).

Attendance at this conference was by invitation only and researchers from countries that have had Rcc epidemics in the past as well as representatives from countries such as Argentina, New Zealand and Estonia where it is an emerging problem, were present.

Very relevant topics were addressed, such as the epidemiology of Rcc, breeding for resistance to the pathogen as well as the chemical control thereof.

The experiences and perspectives from the different countries were valuable to learn from, especially since Rcc is an emerging problem in South Africa.

Kelly also presented a poster on the Rcc work that is currently being done at CenGen in collaboration with the South African Barley Breeding Institute (SABBI) and the University of Southern Queensland, Australia, at the workshop.

Kelly also attended the AB InBev growers’ appreciation day in the irrigated barley region at Hartswater close to Kimberley in the Northern Cape. The event stretched over 2 days.

CenGen got to share an information stall with Ms Thandiwe Moyana-Munzara, Africa Agriculture Sustainability and Partnerships Manager at AB Inbev, who spoke about the company’s sustainability policies.

Kelly told the farmers and other attendees about AB InBev’s public interest commitment investments such as the KASPTM technology that was placed at CenGen earlier this year and how it will advance barley and other crops-related research.

She also had the privilege to reach out to farmers who are unfamiliar with science and the role it plays in developing barley cultivars.