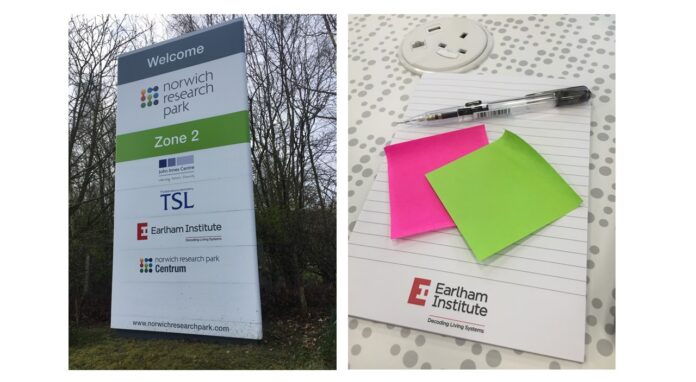 In early March, Kelly Breeds (CenGen Barley Research Lead) attended a Data Carpentry course at the Earlham Institute (EI), where she benefitted from the tutelage of Dr Robert Davey and other members of EI’s Data Infrastructure and Algorithms Group. Topics covered during the course included data organisation in spreadsheets, data cleaning in OpenRefine, data analysis and visualisation in R and data management with SQL. The new skills, tricks and tips learned will be disseminated to the CenGen team during weekly bioinformatics sessions, and implemented in various on-going projects. They will be particularly useful for handling large datasets, such as those obtained from high-throughput genotyping service providers.

Kelly was fortunate to meet with Dr Tjelvar Olsson, the support specialist of the John Innes Centre (JIC) Informatic team. Dr Olsson recently guided CenGen through the process of setting up their own server that will be dedicated to bioinformatics. He also organized a tour of the EI and JIC’s shared data centre, where the considerations for running such an extensive centre were discussed. Kelly also reconnected with Drs. Burkhard Steuernagel and Diane Saunders (both of JIC), who together with Dr Davey, led the third Bioinformatics and Wheat Genomics workshop in South Africa in February.

After meeting with more of JIC’s prominent barley/wheat researchers, including Professor James Brown and Dr Paul Nicholson, Kelly ventured further north to Scotland, where although unable to spot “Nessie”, she was able to have fruitful discussions with researchers at the James Hutton Institute (Professor Adrian Newton) and at Scotland’s Rural College (Dr Neil Havis).

A huge thank you is extended to the barley industry for sponsoring the trip to the United Kingdom.