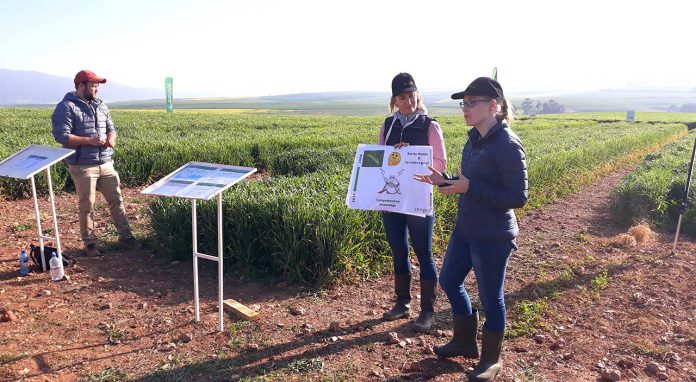 These two teams explained to the producers how CenGen’s research programmes enhance the work that the wheat and barley breeders do. In the wheat research programme the focus is on identifying the genes that are responsible for new sources of resistance to the rusts (leaf, stripe and stem rust) and crown rot, while the barley disease research programme is centred around identifying genes for resistance to economically important diseases such as spot and net blotch, scald and leaf rust. The barley programme also makes a pre-emptive effort to develop stem rust resistant barley cultivars before this disease transfers from wheat to barley. The genes that are identified in the two research programmes are then incorporated into the respective breeding programmes and tracked in the breeding material on an annual basis (also see our previous post).

CenGen is honoured to be able to collaborate with various national and international colleagues from across the globe in their quest to help the local grain breeders. This has proven to be a recipe for success and has, apart from the visible impact on the breeding programmes, also led to scientific publications in international peer-reviewed publications. The high-throughput genetic marker capabilities at CenGen have also recently received a big boost with the installation of highly specialised robotic systems through SAB & AB InBev Public Interest Commitment Investments.

Once again CenGen would like to thank Sensako and SABBI for inviting them to the producers’ day and for enabling them to engage with the producers – the ultimate benefactors of their work – personally.